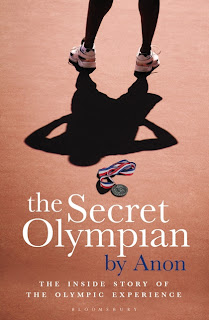 I read this book just after the Olympics finished and found it to be quite a fascinating insight.  It’s not everything you would hope for when the author is Anonymous.  However, its certainly improved my knowledge of the obstacles faced by elite athletes, along with the disappointments of not winning and the impact of arriving home to either retire or work for another four years.
At $19.99 it is certainly an easy choice for the sport’s nut or would make a great gift for your lovable sport’s fan.


About The Secret Olympian


The Secret Olympian exposes the truth of what goes on at the Olympic Games. Shocking, funny and slightly tongue in cheek, a former Olympian reveals the world of the Olympic athlete—and, behind the scenes, what a bizarre world it is...
The vast majority of us can only dream of being an Olympic-level athlete­­­ but we have no real idea of what that means. Here, for the first time, in all its shocking, funny and downright bizarre glory, is the truth of the Olympic experience.
It is an unimaginable world:


The Secret Olympian talks to scores of Olympic athletes - past and present, from Munich 1960 right through to London 2012, including British, American, Australian, Dutch, French, Croatian, German, Canadian and Italian competitors. They all have a tale to tell - and most of those tales would make your eyes pop more than an Olympic weightlifter's.


To buy or learn more visit The Secret Olympian

Posted by Susan May Writer at 9:48 PM