The Age of Miracles by Karen Thomas Walker ★ ★ ★ ★ 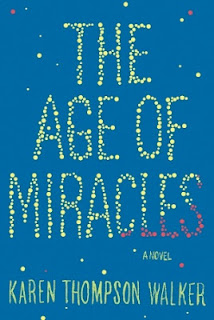 Since I first saw the 1971 apocalyptic film “The Omega Man” starring Charlton Heston, I’ve been fascinated with the end of the world.  How many times can you read about the world ending and still find it interesting? It’s endless because the books are never really about the end of the world but about the characters and their struggles with their new lives.
In “The Age of Miracles”, first time author Karen Thomas Walker tells her apocalyptic vision through the reminiscences of an adult Julia, who as an introverted, only child of eleven, experiences the events of the world which became known as The Slowing.  With little warning, the earth’s rotation slows causing, initially, only a few extra minutes in the day and some mild concern.
But as The Slowing continues and the days and nights become increasingly longer, the entire population begins to realise that they will need to alter their lifestyle.  Midnight can be in full sun and dawn doesn’t necessarily arrive early in the morning.  Decisions must be made as to whether the population sticks to clock time or lives according to the cycle of daylight and darkness.
The scientific facts and worsening health of the entire planet is a backdrop to the central story of Julia coming of age.  Julia’s parents seem to be growing as far apart as the day and night.  Seth, a class mate, for whom Julia has increasingly strong feelings, doesn’t know she exists.  Even her best friend has deserted her and moved with her family to Colorado.
What is most interesting is the layering of the story with the politics of school life, the principles of family and the broader divide in society as each new day dawns a little different from the one before.  When uncertainty is certain, some will abandon their current lives and others will make a stand.
Susan Beth Pfeffer stole a weekend from me when I read her YA novel ‘Life As We Knew It’ with a similar premise and a young protagonist.  So, too, now Walker steals another weekend.  But there is no better way to lose time than watching the world end in the hands of a stunning debut talent like Karen Thomas Walker.

To read more about the book or this author please click over to http://www.theageofmiraclesbook.com/ 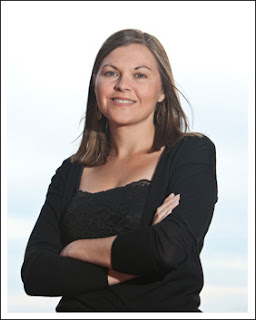 Karen Thompson Walker was born and raised in San Diego, California, where The Age of Miracles is set. She studied English and creative writing at UCLA, where she wrote for the UCLA Daily Bruin. After college, she worked as a newspaper reporter in the San Diego area before moving to New York City to attend the Columbia University MFA program.
A former book editor at Simon & Schuster, she wrote The Age of Miracles in the mornings before work—sometimes while riding the subway.
She is the recipient of the 2011 Sirenland Fellowship as well as a Bomb Magazine fiction prize. She lives in Brooklyn with her husband.

Posted by Susan May Writer at 2:04 AM