The Dirtiest Race in History by Richard Moore ★ ★ ★★ 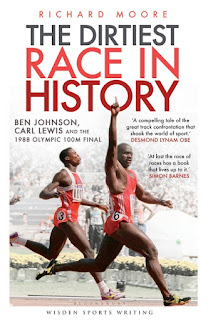 First up, I will reveal that sport is not my thing.  During the Olympics I was up watching the swimming, yes.  However, anything else is of cursory interest.  So, when I received this rather large book on a single race run in less than ten seconds, twenty-four years ago, I wasn’t doing the happy dance.  How can you write a considerably large book about that?
But the book isn’t just about the race.  It’s about the doping and the rivalry that led up to the race.  And that is a fascinating subject.  The race wasn’t just about winning. It was also about two men, Carl Lewis and Ben Johnson who were personally and morally opposed and what this race meant to them financially and emotionally. And then there's the handlers and coaches and finincial under-the-table deals that will boggle you.  It’s gripping and suspenseful and as the race nears, towards the end of the book, almost impossible to stop reading.  When I’d finished I felt like I’d run the race.
Having read this and The Secret Olympian back to back, I’m becoming quite the knowledgeable sports person, which if you knew me is very funny.  The power of books to educate as well as entertain should never be discounted.
Sports fans this is an entertaining book you simply must read.

About The Dirtiest Race in History


The 1988 Seoul Olympics played host to what has been described by some as the dirtiest race of all time, by others as the greatest. The final of the men's 100 metres at those Olympics is certainly the most infamous in the history of athletics, and more indelibly etched into the consciousness of the sport, the Olympics, and a global audience of millions, than any other athletics event before or since.
Ben Johnson's world-record time of 9.79 seconds - as thrilling as it was - was the beginning rather than the end of the story. Following the race, Johnson tested positive, news that generated as many - if not more - shockwaves as his fastest ever run. He was stripped of the title, with Lewis awarded the gold medal, Linford Christie the silver and Calvin Smith the bronze.
More than two decades on, the story still hadn't ended. In 1999 Lewis was named Sportsman of the Century by the IOC, and Olympian of the Century by Sports Illustrated. Yet his reputation was damaged by revelations that he too used performance-enhancing drugs, and tested positive prior to the Seoul Olympics. Christie also tested positive in Seoul but his explanation, that the banned substance had been in ginseng tea, was accepted. Smith, now a lecturer in English literature at a Florida university, was the only athlete in the top five whose reputation remains unblemished - the others all tested positive at some stage in their careers.
Containing remarkable new revelations, this book uses witness interviews - with Johnson, Lewis and Smith among others - to reconstruct the build-up to the race, the race itself, and the fallout when news of Johnson's positive test broke and he was forced into hiding. It also examines the rivalry of the two favourites going into it, and puts the race in a historical context, examining its continuing relevance on the sport today, where every new record elicits scepticism.