BETWEEN A ROCK & AN EXCITING PLACE

Exotic locales, intriguing characters and a storyline that deepens with each turn of the page, this is what Thomas Mogford offers us in his first published novel, SHADOW OF THE ROCK. 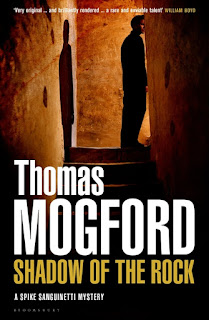 Spike Sanguinetti is a Tax Lawyer in the financial hub of Gibraltar, a British Territory, situated on the Southern Coast of Spain. On a hot, sultry night Spike’s evening is interrupted by an old schoolmate, Solomon Hassan, who begs for Spike’s assistance. A woman has been murdered on a beach in Tangiers and Solomon has been accused.
Reluctantly, Spike agrees to assist his friend and in an effort to delay Solomon’s extradition back to Morocco, heads to Tangiers. Local authorities have wiped their hands of any further investigation, concentrating instead on getting their suspect back into their hands. Spike starts to dig further into the murder and discovers the seedier side of Tangiers and its dangers.
Following the trail of the dead Esperanza, Spike meets Zahra, a Bedouin woman. Zahra is investigating the mysterious disappearance of her father several years ago, an event that links not only back to Esperanza but to Solomon and his employers, an international corporation with financial ties to both Morocco and Gibraltar.
The path to the truth is a long and winding one littered with corruption, bigotry and the lure of the lucre. Violence loiters threateningly behind the darkened corners of the slums of Morocco whilst egotistical power moguls flaunt their wealth with careless abandon. Spike with a unique style and confidence perfectly carries the story.
Mogford has written a novel in a tight, efficient style without losing rich images that allow the reader to vividly experience the Spike’s world. Quirky secondary characters, such as the philosophical hotel receptionist, relieve the tension through wry comedy.
Mogford was a journalist and a translator for the European Parliament. Whilst studying to be a lawyer, he discovered that the long hours involved didn’t leave time for writing but luckily for us he refocused his talents into his first love, writing.
This is the first in the series of Spike Sanguinetti, with his next venture “Sign of the Cross” taking him to Malta where he discovers the death of his Aunt and Uncle are not as clear-cut as they seem. Set in the land of the Knights of St John, I can’t wait to visit with Spike again. 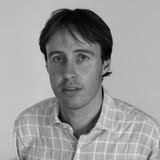 Thomas Mogford has worked as a journalist for Time Out and as a translator for the UEFA Champions League. His first novel in the Spike Sanguinetti series, Shadow of the Rock, was published by Bloomsbury in 2012. It received a starred review from Library Journal, which described it as a 'breathtaking debut ... Mogford's exotic locales, gorgeous prose, and closing twist make this debut a showstopper'. Thomas Mogford is married and lives with his family in London.
@ThomasMogford      http://www.thomasmogford.com/

Posted by Susan May Writer at 9:56 PM