NO APOLOGIES NEEDED FOR THIS THRILLER 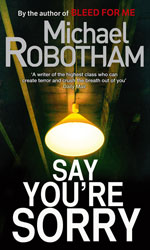 “Nobody writes like Robotham” is stamped across the cover of my review copy of his latest thriller, ‘Say You’re Sorry’.  After reading this fourth addition to his ‘Joseph O'Loughlin’ series, I would have to say if anyone does write like him then they too can count themselves as a master storyteller.
I dare anyone to begin reading this and not finish it in more than four or five sittings.  As a bedtime reader, the only thing that drew me away was sleep and I cursed my weary eyes each time.  Robotham has written a credible rounded character in psychologist Joseph O'Loughlin, suffering not only from early stage Parkinson’s disease but, also, separation from his wife.  He doesn’t arrive at conclusions easily but as he is drawn into solving the mystery of a brutal double murder and two missing teenagers, the twists tangle themselves around our hero as much as the reader.
Police believe that teenage best friends, Piper and Tash, who went missing one Sunday morning, will never be found and are likely dead.  In reality they are still held in a dark basement by a sadistic captor.
Three years later, O’Loughlin is brought in to consult on a couple murdered at a farmhouse in a blizzard.  A young man with psychological problems claiming to be innocent is the chief suspect.
Simultaneously, a young girl’s body is found in the nearby frozen river.  Only O’Loughlin senses that the seemingly unrelated deaths could be connected and possibly linked to the girl’s kidnapping.
We know the girls are alive as Piper’s narrative describes the girl’s disappearance and horrors of captivity over the years.  The story switches artfully between her viewpoint and O’Loughlin’s with each adding to the building suspense.  Piper desperately plots to escape their captor and O’Loughlin, just as desperately, attempts to solve the girl’s puzzling disappearance.
You will think you see the twists and turns coming but you will be wrong and that is the best kind of thriller.  This one is that good, that for many books afterwards, I found myself cursing, “Nobody writes like Robotham”.


My review copy of SAY YOU'RE SORRY supplied by Hachette Australia. For more information about this book, click through to Hachette website HERE.   Available now for $29.99 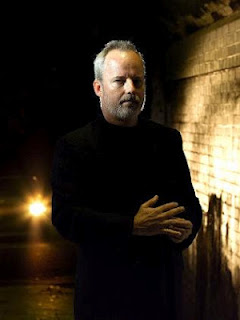 Born in Australia in November 1960, Michael Robotham grew up in small country towns that had more dogs than people and more flies than dogs. He escaped in 1979 and became a cadet journalist on an afternoon newspaper in Sydney.
For the next fourteen years he wrote for newspapers and magazines in Australia, Britain and America.
In 1993 he quit journalism to become a ghostwriter, collaborating with politicians, pop stars, psychologists, adventurers and show business personalities to write their autobiographies. Twelve of these non-fiction titles were bestsellers with combined sales of more than 2 million copies.
His first novel 'The Suspect', a psychological thriller, was chosen by the world’s largest consortium of book clubs as only the fifth “International Book of the Month”, making it the top recommendation to 28 million book club members in fifteen countries. It has been translated into twenty-two languages.
His second novel 'Lost' won the Ned Kelly Award for the Crime Book of the Year in 2005, given by the Australian Crime Writers Association. It was also shortlisted for the 2006 Barry Award for the BEST BRITISH NOVEL published in the US in 2005.
Michael's subsequent novels 'The Night Ferry' and 'Shatter' were both shortlisted for UK Crime Writers Association Steel Dagger in 2007 and 2008. 'Shatter' was also shortlisted in the inaugural ITV3 Thriller Awards in the UK and for South Africa's Boeke Prize. In August 2008 'Shatter' won the Ned Kelly award for Australia's best crime novel. More recently, 'Bleed for Me' – Michael's sixth novel – was shortlisted for the 2010 Ned Kelly Award. His latest novel 'The Wreckage' has won universal praise and was described by Nelson De Mille as 'one of the best novels to come out of the chaos of Iraq.'
Michael can most often be found working in his 'pit of despair' (basement office) on Sydney's northern beaches where he funds the extravagant lifestyles of a wife and three daughters.

Posted by Susan May Writer at 3:41 AM