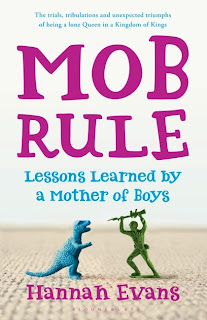 You know you've joined the MOB when you hear...


I rarely say this, being aware that we all have our own tastes, but Mob Rule is a hands-down, must-read for all mothers of boys (MOB). Fellow MOB-er, author Hannah Evans, manages to make you spit your morning coffee in laughter at her tales of the high jinks and hilarious antics of life as the sole female in an otherwise all male family. Being in the same boat, and having read on the topic before, I was prepared for something clichéd and self aggrandizing, but Evans has created a book that is fresh, funny and something that’s as good for a MOB as a solo weekend at good hotel.
If you’ve ever done the long haul driving holiday (why do we think this will work?) this is the book for you. If you’ve ever questioned your femininity based on your fallback wardrobe of boots, trackies and pull on jumpers, then this is a must read. And if you’ve ever found your house…well, just impervious to any kind of cleaning, then this is a sanity saver – going on the philosophy that laughter is the best medicine.
I gave it 5 stars – and I’m as surprised as you are.

Hannah Evans has three small boys. In her world, farting is so much more interesting than phonics, dam-building trumps damsels in distress any day and, astonishingly, she now instinctively knows the difference between a Frontloader and a JCB. It's a world of mud - and just occasionally blood - sweat and tears. It is also a world of indescribable joy.
Often light-hearted, always engaging, she specialises in researching and creating VIVID and EMOTIVE features, that delve into the idiosyncrasies of the human race.
MOB Rule is the funny, honest and eye-opening account of Hannah's experiences as a Mother of Boys. Supplemented by recipes, quizzes, mnemonics and mysteries, it is the indispensible book for anyone who finds themselves adrift on a sea of testosterone, wondering when the lifeboat is going to show up.
You may be outnumbered, your face may be frazzled and your toe-nails black and bare, but know that, far from being alone, you're part of a very special club. Welcome to ... the MOB!

Posted by Susan May Writer at 9:20 PM