WOOL introduced the silo and its inhabitants.
SHIFT told the story of their making.
DUST will chronicle their undoing.
Welcome to the underground. 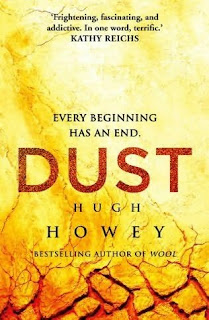 The conclusion of a great series brings great sadness for the fans. Hugh Howey’s “Wool” saga only came into existence just over two years ago. So it’s been quite a whirlwind ride for fans and the author until now the release of Dust brings us the finale.
Howey leapt from self-published author to New York Times bestselling novelist in record time. On the way, he changed the way authors and the publishing world did business by refusing to relinquish his e-book rights for seven figure publishing deals. He finally signed a historic deal with Simon & Schuster who received only paper-book distribution while Howey kept his lucrative e-book rights.
With the publication of “Dust,” our visit to the Silo has ended. If you haven’t read “Wool” and “Shift” (the second book), then stop reading this review, and immediately purchase these two. You won’t regret it, and you will join the millions of fans who can’t get enough of this world.
It’s impossible to review “Dust” and not reveal spoilers for the original two, so I will give only a general outline of the world. “Wool” fans this is a brilliant continuation directly from “Shift” and finds the lead characters still embroiled in the politics of the Silo.

The silo, which consists of nearly two-hundred below-ground, concrete levels, is filled with thousands of survivors from an event occurring over 60 years before. The unremembered event left the outside world uninhabitable with toxic air. Inhabitants who breach the strict Silo laws are sent outside to clean the one screen which gives the occupants a view of the desolate world; their last act before death by the poisonous fumes.
The silo is segmented into class structures from I.T. on top, through to the middle levels, to the lower class “down deep.” From the “down deep” a hero, Jules, arises. She begins to question their world at a perilous risk to her and, also, the silo.
“Dust” is an exciting adventure ride introducing new characters and new challenges for those we have come to love. Some will live, and you will be surprised by those who die. It is a satisfying conclusion to one of the greatest science-fiction worlds created in modern literature.

My review copy of Dust thanks the wonderful and generous HUGH HOWEY
My very own paper copy to love and treasure from the very deep but fun people at RANDOM HOUSE Australia.

Hugh Howey is the author of Wool, a bestselling novel that has appeared in the top 5 of science fiction on Amazon. He is also the author of the award-winning Molly Fyde Saga. He lives in Boone, N.C. with his wife Amber and their dog Bella.