Watching You by Michael Robotham ★★★★

NOTHING BEATS A ROBOTHAM THRILLER among my friends. Many of them stopped their lives for a few days while they read it, and some reading it in one sitting. It was so good that Stephen King named it in his top three reads for 2012. I wholeheartedly concur with the master of suspense. This is all to say that Michael Robotham comes highly recommended and writes a great story.

He writes dark killer thrillers and “Watching You” is classic Robotham. He really puts his protagonists through the wringer, and again we meet another poor character who is dealing with great adversity. Robotham brings back our favorite psychologist, Joe O’Loughlin, who is also dealing with his own personal physical and emotional adversity, .
Marnie Logan has good reason to be depressed and in need of O’Loughlin’s services. Her husband disappeared over a year ago, without a word, leaving her a poverty-stricken single mother. She has been forced into prostitution in order to pay off her husband’s debts to a money-lender. And she, also, has this strange feeling she is being watched.
When a book of Marnie’s life is discovered which includes pictures, interviews with friends and old teachers, and other people from her past, she believes her husband was creating a birthday surprise. But something is not right. In order to help Marnie, O’Loughlin interviews some of the people from her past, and discovers their stories of Marnie seem to be of a darker and entirely different person.
Robotham writes suspense with the best, and he weaves the story of Marnie’s misaligned past beautifully with the added tension of an unknown stalker. Who is the stalker and, in fact, who really is Marnie?
“Watching You” is another thrilling book in the O’Loughlin series, and while “Say You’re Sorry” is still my favorite. You cannot beat a Robotham thriller. 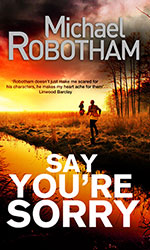 ABOUT THE AUTHOR
Born in Australia in November 1960, Michael Robotham grew up in small country towns 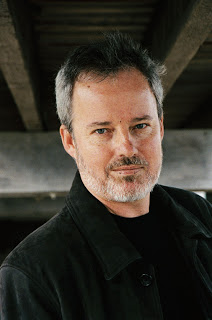 that had more dogs than people and more flies than dogs. He escaped in 1979 and became a cadet journalist on an afternoon newspaper in Sydney.

For the next fourteen years he wrote for newspapers and magazines in Australia, Britain and America.
In 1993 he quit journalism to become a ghostwriter, collaborating with politicians, pop stars, psychologists, adventurers and show business personalities to write their autobiographies. Twelve of these non-fiction titles were bestsellers with combined sales of more than 2 million copies.
His first novel 'The Suspect', a psychological thriller, was chosen by the world’s largest consortium of book clubs as only the fifth “International Book of the Month”, making it the top recommendation to 28 million book club members in fifteen countries. It has been translated into twenty-two languages.
His second novel 'Lost' won the Ned Kelly Award for the Crime Book of the Year in 2005, given by the Australian Crime Writers Association. It was also shortlisted for the 2006 Barry Award for the BEST BRITISH NOVEL published in the US in 2005.
Michael's subsequent novels 'The Night Ferry' and 'Shatter' were both shortlisted for UK Crime Writers Association Steel Dagger in 2007 and 2008. 'Shatter' was also shortlisted in the inaugural ITV3 Thriller Awards in the UK and for South Africa's Boeke Prize. In August 2008 'Shatter' won the Ned Kelly award for Australia's best crime novel. More recently, 'Bleed for Me' – Michael's sixth novel – was shortlisted for the 2010 Ned Kelly Award. His latest novel 'The Wreckage' has won universal praise and was described by Nelson De Mille as 'one of the best novels to come out of the chaos of Iraq.'

Posted by Susan May Writer at 9:35 PM