My ten and twelve year old boys are, sadly, at an age where they don’t want me to read to them anymore.  In fact, thanks to iPads, X-boxes and cable TV, they don’t even want to read themselves anymore.
However, they both expressed interest in me reading them “Raven Girl”.  In the end, my hubby sat in and for several nights our family eagerly anticipated the next reading.  Reading this book with them was a wonderful experience.  First they wanted to read it; then they didn’t want me to stop. They loved the story and wanted it read again.  A miracle.

“Once there was a Postman who fell in love with a Raven.”

The opening line in this modern-day, dark, fairy tale begins a marvelous tale of a postman who “thought he had seen just about everything Her Majesty’s Postal Service could offer in the way of danger and difficulty, hilarity and boredom”.  When he rescues a baby raven, which has fallen from her nest, they fall in love and eventually have a baby raven girl who has human form but speaks in raven.  Like any child, the raven girl is not happy with herself and seeks to be transformed.
Niffenegger has collaborated with Royal Ballet Resident Choreographer Wayne McGregor to produce a ballet based on this book. It premiered at the Royal Opera House in London in May 2013. 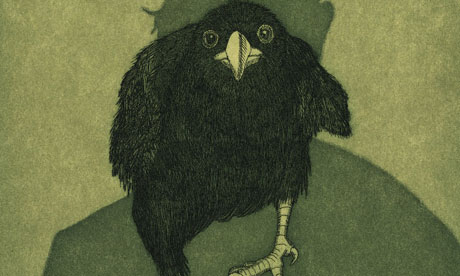 Audrey Niffenegger was on my list of beloved authors before this book.  Her first novel, “The Time Traveler’s Wife” was an international best-seller and her second book, a ghost story entitled “Her Fearful Symmetry”, is in my Top reads.


Niffenegger puts words together from which spin magic.   She is also a talented artist. In “Raven Girl”, she not only wrote a charming tale, she also illustrated it beautifully using the 17th century technique of aquatint, which uses metal, acid, wax and rosin to achieve delicate tone and detailed images.
Anyone, any age reading this will fall in love with the tale of the “Raven Girl”.  It is a book of exceptional beauty and one to treasure.

My review copy of RAVEN GIRL thanks to the hardworking people at RANDOM HOUSE Australia.
Release Dates: Australia and New Zealand: May 2013

Audrey Niffenegger is an exceptionally creative writer and visual artist who has achieved enormous success in both worlds. Her debut novel, The Time Traveler's Wife, has sold more than seven million copies worldwide and has been translated into forty languages. A Richard & Judy book club choice in the UK, it has been a huge bestseller all round the world. In the Daily Telegraph's readers' poll of the 'Top 50 Books of All Time' it appeared at no. 11. Niffenegger is also the author of two 'novels-in-pictures', The Three Incestuous Sisters(2005) and The Adventuress (2006), both published by Cape. Her graphic novel The Night Bookmobile was serialized in the Guardian and published on the Cape Graphic list.
A Chicago native, Niffenegger received her MFA in Printmaking and Drawing from Northwestern University. Her art has been widely exhibited in the United States and is in the permanent collections of the Library of Congress and Harvard University's Houghton Library.

Posted by Susan May Writer at 6:09 PM