Devil in the Hole by Charles Salzberg ★★★★

Into the mind of a murderer 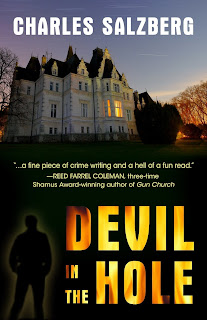 James Kirkland is not your typical nosy neighbor. So, when he notices all of the lights blazing in his neighbors house, he’s curious but not curious enough to knock on the door and inquire after their health.  He is inquisitive enough to notice that the lights are slowly burning themselves out.

A phone call to the police results in the discovery of the gruesome murders of an entire family including the dog, minus one member. John Hartman, husband, son and father of three is missing and all evidence points to him as the prime suspect.


We are given an unusual insight, discovering the story through the eyes of a cast of characters who have their own individual opinion on the man who is John Hartman. From the senior investigator who has become obsessed with apprehending Hartman, to his former mistress, to past work colleagues and even his postman.  Even Hartman's side of the story is revealed through his viewpoint; a man who has committed the unthinkable crime and managed to elude authorities but not himself.


Based on a true story, the John List murders, reading the first page to Devil in the Hole is like having just one potato chip. You simply must have more.


Read this book if you want to treat yourself to a novel that is different, a novel not told from the traditional single viewpoint, but through multiple character’s viewpoints. I felt this allowed an opportunity to discover each individual's opinion of Hartman, through their own distinct and unique interactions.  This way we have an opportunity to attempt to understand how such a horrendous crime impacts everyone.

Thank you to author Charles Salzberg who contacted us directly and supplied a copy of his novel.

A celebrated and popular creative writing teacher, he has been a Visiting Professor at the S.I. Newhouse School of Public Communications at Syracuse University, and has taught writing at Sarah Lawrence College, Hunter College, the Writer's Voice, and the New York Writers Workshop, where he is a Founding Member. He is a consulting editor at the webzine Ducts.org and co-host, with Jonathan Kravetz, of the reading series, Trumpet Fiction, at KGB in New York City.
Visit Charles' website here.
Posted by Unknown at 2:40 AM