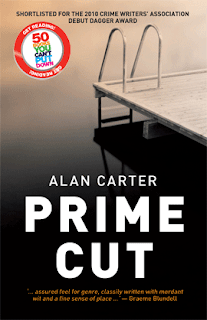 The West Australian outback was never on the career path for Detective Senior Constable Philip “Cato” Kwong. The poster boy for political correctness, Cato’s career had been on the fast-track, until everything goes wrong and Cato finds himself an unwilling member of the Stock Squad, investigating the deaths of rotting road-kill.
Mining town Hopetoun is not part of Cato’s patch, a booming anomaly in a world in economic meltdown. However when a human torso washes ashore on Hopetoun’s scenic coastline, Cato is despatched to investigate and a glimmer of light appears on his career radar. Ignoring the fact that his rescue from highway hell is only for a few days until staff from other departments can be relocated, Cato grabs the opportunity to redeem himself to his old boss, DI Mick Hutchens and takes on the case like he has no tomorrow.
It’s a plan that works well until he realises that the senior officer in the two-cop town is one of his exes, Tess Maguire.  Tess has demons of her own to lay to rest, and the last person she needs to see on her turf is Cato.  After all, where Cato goes, trouble follows, and so he does, making enemies faster than friends as he lifts the lid on migrant exploitation and upsets the power brokers of Hopetoun.
However, as their investigation proceeds and another death comes to light, the whole team becomes a potential target for an even more disturbed criminal mind whose crimes not only cross the decades, but half the world as well.
With a succinct and direct style, Alan Carter has written a novel that grips from the first page to the last. An immigrant to Australia from the UK, Carter has captured the dry Australian spirit accurately. His characters are well drawn and thought out and reflect their locales perfectly.  Carter’s familiarity with the Great Southern region adds to the tale and his personal experiences of Hopetoun and a mining boom give a depth of understanding many authors would do well to emulate.

Thank you to Fremantle Press for our review copy of Prime Cut .

Alan Carter was born in Sunderland, UK, in 1959. He holds a degree in Communications Studies from Sunderland Polytechnic and immigrated to Australia in 1991. Alan lives in Fremantle with his wife Kath and son Liam. He works as a television documentary director. In his spare time he follows a black line up and down the Fremantle pool. Prime Cut is Alan Carter’s first novel. He wrote it while he was living in Hopetoun as a kept man.
Awards - Winner, Ned Kelly Award for Best First Fiction, 2011Short listed, UK Crime Writers’ Association Debut Dagger Award, 2010

Posted by Susan May Writer at 2:19 AM