From insanity to hope and beyond 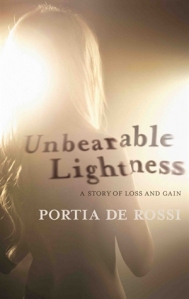 Three words flow through my mind as I read ‘Unbearable Lightness’—heartbreaking, mesmerising and hope.  In the book's opening paragraph, “He doesn’t wait until I’m awake.  He comes into my unconscious to find me, to pull me out.  He seizes my logical mind and disables it with fear,” I hear all those words in-between these lines.
That Portia De Rossi had the strength to write ‘Unbearable Lightness’, her personal witness to the mental disorder anorexia nervosa, adds another word to the list—courage.
When Karen Carpenter died in 1983, everyone talked about anorexia, the disease that claimed her.  It was the first time I had ever heard those words and I wondered why someone with the voice and face of an angel, with all her success, would starve themselves to death.
Over the years, the covers of magazines have paraded celebrities and models who have struggled with this disease, the most famous being Princess Diana.  It’s almost as though anorexia seeks out the most beautiful and the most talented to torment.  Each time an unearthly, skeletal figure stares back from the pages, I wonder what goes on in their mind to succumb to a vision that requires the punishing of their bodies until they resemble concentration camp victims.
Portia De Rossi has finally answered the question of ‘why’ in ‘Unbearable Lightness’.  We follow her from when the disease first strikes, through her struggle to survive whilst achieving all of her dreamed success, to the writing of the book.
In writing in first person present tense, we are inside her head, uniquely experiencing her life and her relationship with food, not as a reader, but as a passenger to the insanity of her perspective. Her misinterpretations of simple compliments such as, ‘You looked like a normal, healthy woman,’ to mean she is ‘fat’ to her constantly feeling ugly, overweight and unlovable is heart-wrenching. As she struggles to cope with her gay sexuality and the fear of discovery, whilst maintaining her successful career, starring on ‘Ally McBeal’, we sympathise.  We come to know her and we feel her anguish as if she is our beloved sister.
One of the most refreshing aspects of this book is that the story begins at the time Portia lands her role on the hit show, with short, flashbacks to her childhood and school life inserted amidst her Hollywood life. ‘Unbearable Lightness’ serves her Hollywood Life, dessert first, but still gives us enough background childhood detail along the way, to allow us to understand Portia and the roots of her illness.
My recommendation is that every parent of a teenager read this book and then give it to their child. Portia comments, "I made the mistake of thinking that what I look like is more important than who I am.”  After reading this book, it is clear this is the one true lesson we must teach our children.  Portia De Rossi wrote this book to liberate others imprisoned by this illness.
Buy “Unbearable Lightness”, read through the heartbreak, share its mesmerising message and spread the promise of hope it contains.