WHAT’S FOR DINNER by Curtis Stone ★★★★ 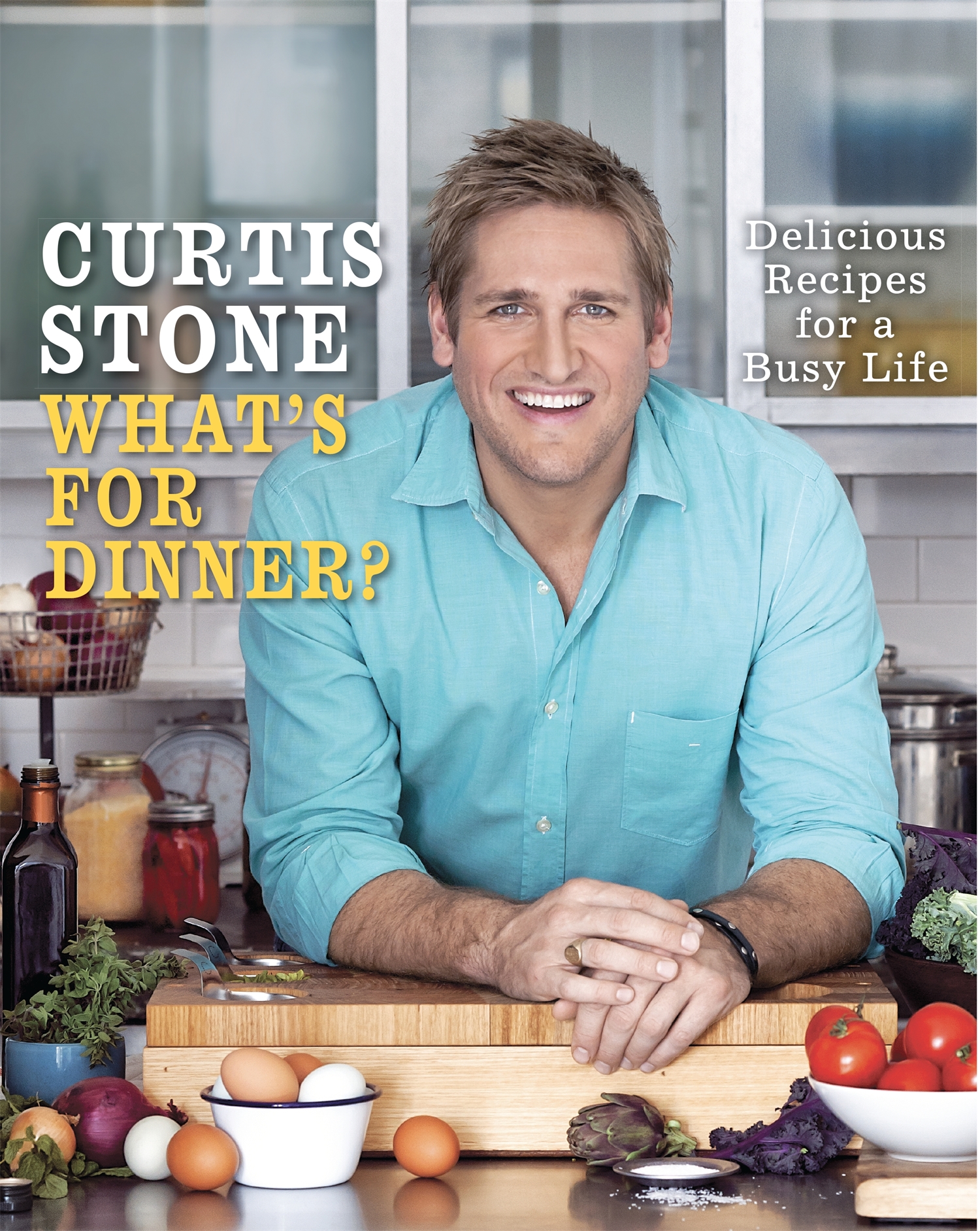 Okay let’s address the elephant in the room.  Curtis Stone is gorgeous isn’t he?  He is the image of the Australian male I would like us Aussies to be known for around the world.  This is opposed to the long-haired, flip-flop wearing, beer guzzler larrikin that is held up on a regular basis.
He’s a charming, enthusiastic guy who cooks, and any girl would be pleased to take him home to their Mum.  A Swiss guest in my house picked up the book the day it arrived and with a big smile on her face, asked, “Who is this Curtis Stone?”  Hear the emphasis on “this” and you will understand why she asked.  “And he’s Australian?” she said after I answered her.  “Hmmm.”
Calm down now ladies because, sadly, he married in June 2013.  If the pictures in his latest cookbook, “WHAT’S FOR DINNER?” are anything to go by, actress Lindsay Price, his wife, is just as gorgeous and lovable as him.
They have a beautiful son Hudson, born on November 6, 2011 and photos of the family feature throughout the book.  The photos are delightful and several friends oohed an ahhed over the family shots at a recent dinner.
Curtis knows we are busy.  Personally, my feet rarely touch the ground between running the taxi-driver service after school, writing commitments and catching up with friends and family.  Is anyone else’s diary, whether you have kids or not, any different these days?   So we want good easy-to-make food to fuel us.

“Dinners at my house were all about being together,” says Curtis in the book’s introduction and I agree.   We’re not a fast-food family either.  So, we cook most nights and really try to vary our menu.
There are more than one hundred and thirty delicious recipes in “WHAT’S FOR DINNER?” and having trialed quite a few we (my husband loves to cook too) found them very easy to follow.  Publishers send cookbooks to non-chefs like me because if I can use them anyone can.
Each sections is separated into days of the week: Motivating Mondays, Time-Saving Tuesdays, One Pot Wednesdays, Thrifty Thursdays, Five-Ingredient Fridays, Dinner-Party Saturdays, Family Supper Sundays and finally Something Sweet.

On each recipe page Curtis has added his own little story on the meal; where he first came upon it, why he chose it and ‘Curtis’s Kitchen Notes’ with hints and tips. It’s almost like having him in the kitchen with you. The meal pictures are beautiful and mouth-watering and he’s created some new takes on classic recipes.
If you can’t have Curtis Stone in your home (I know I am only just coming to terms with that) this book is a lovely stand-in. Who knows, with such easy recipes, maybe the man of your house may become inspired. Then you, too, will have your own version of Curtis in no time.


P.S. Would make a lovely gift for Mum or a friend. Next time you are invited to dinner, don’t bring wine or chocolates, bring ‘Curtis’.


My review copy of Curtis Stone’s What’s For Dinner? thanks to the gorgeous people at RANDOM HOUSE Australia.
Release Dates: Australia and New Zealand: May 2013

ABOUT THE AUTHOR
Curtis Stone is a chef, author and TV personality. His philosophy is to cook as Mother Nature intended—buy local, seasonal and organic ingredients, keep recipes simple and allow the food to speak for itself.

It’s a world Curtis already knows well. Born in Melbourne, Australia, Curtis’s passion for food was inspired as a boy by his mother’s baking and his grandmother’s famous fudge. Mid-way through business school he left to don his first apron at the Savoy Hotel in Melbourne and later honed his skills in London under legendary three-star Michelin genius Marco Pierre White at Café Royal, Mirabelle and the revered Quo Vadis.
Curtis appeared in a number of cooking programs in the UK before hosting three seasons of Surfing the Menu in Australia—an instant international hit which caught the eye of US producers. This led to his own US series Take Home Chef on TLC in 2006, which has since been enjoyed in more than 70 countries.
Inspiring home cooks is Curtis’ vision as he works selectively with grocery stores to improve fresh produce offerings, devise recipe cards and help families think seasonally, shaping the nation and their shopping habits. As he loves to point out: "when you walk down the street and someone comes up and says, ‘You know what? We never used to cook fish in our house. Since we’ve tried that salmon recipe we have it once a week.’ The feeling that gives you is worth a million other things."


Curtis lives in Los Angeles with partner Lindsay Price and their son Hudson, born in November 2011.
Posted by Susan May Writer at 6:24 AM