An Interview with Toni Anderson

Author of 'Edge of Survival' 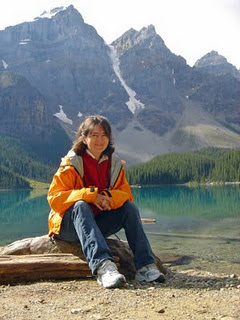 Toni Anderson is a former marine biologist who conducted her Ph.D. at the Gatty Marine Laboratory in St. Andrews, Fife, Scotland.  She was born and raised in the U.K., but now lives in the Canadian prairies with her husband and two children, living about as far from the ocean as possible.
She writes past paced adventure and suspense romance with strong female characters.   “Edge of Survival” her latest thriller was released in November, with one of the gutsiest, most intelligent heroines she’s ever written, Cameran Young (Cam), whose challenges are compounded by her diabetes.
Thank you to Toni for taking the time to satisfy our curiosity on what she enjoys about writing, what genre she wouldn’t dare attempt and her musings on wanderlust.

What were you doing when the idea for your new book “Edge of Survival” came to you and what did you think?
I don’t even remember what I was doing. I was probably in the shower or walking the dogs.  I do remember I was back in Scotland, my kids were tiny, and it was driech—a day when thick grey clouds are hanging heavily in the sky, but no rain so to speak. The story came to me in sections, and each section was a revelation. First, the opening scene and location. Then the hero with all his flaws. Next the heroine’s medical condition (I had a good sense of who she was but not why). The police investigation had to work with and contribute to the overall story arc. The last piece of the puzzle slotted into place with such—I hate to use the term ‘brilliance’ but as I had help from a friend I suppose I can call him brilliant.  Then I knew the story was ready to write.
What did I think?  *Grin* I hoped I could do justice to the idea and that other people would like it as much as I did.
What do you enjoy most about writing?
I like the solitude. I like the fact that when I write I’m no longer a mother and a wife and a daughter and a sister. I love being able to pursue my passion and get the voices out of my head. I love untangling a web of thoughts and creating an actual story that makes sense (hopefully). I love the rush when it all goes well.
I suspect I also love the hair-pulling days when the whole book sucks. I love connecting with people who ‘get’ what it is to be a writer and those who enjoy reading my books.  Is there a bigger thrill than that?
What genre would you love to write in but you don’t dare?  And why?
I have an idea for a YA but I don’t think it’s like any YA I’ve seen in today’s market. The story is a little controversial in terms of politics so I haven’t done more than let the idea bounce around my skull. It isn’t paranormal. It is very British. I’m not convinced I have the writing chops to pull it off. Maybe one day.
If you could co-author a book with any other author—alive or dead, who would they be and why?
That’s a difficult question because I have so many favourite authors in many different genres. If I had to choose one it would probably be Nora Roberts. I love the fact she writes such a diverse array of storylines and isn’t stuck in a restrictive box of say just police procedurals or serial killers. Plus, she has such a phenomenal fan-base, LOL. I admire her work ethic. I don’t know any other author who is as productive as she is. Even if I had to forgo sleep for a month I’d be thrilled to work with Nora.
How have you, as an author, adapted to the Digital age?
All my publishers have been digital-first publishers so I haven’t had to adapt at all. I love books in any form. It’s a time of great change in publishing (more change is needed). What I find bemusing is that many readers think that if they embrace digital it means they lose print. I don’t believe that’s the case. I love both formats and read both formats. They are not mutually exclusive.
What question have you not been asked in an interview, that you wished you had?
Where am I from?
I come from a small town called Broseley in rural Shropshire, England. As a kid I always wanted to get away and explore the world. But now I’m older, and far, far from home, I miss it. It makes me think about what it must have been like a century ago when people travelled halfway around the world. They rarely returned and it must have been heartbreaking at times. Some people are born with wanderlust, but it doesn’t mean they don’t miss their family and hometown.
You can find more on Toni Anderson at  http://tonianderson.blogspot.com/


This interview published in January 2012 issue of Suspense Magazine

Posted by Susan May Writer at 6:02 AM

Email ThisBlogThis!Share to TwitterShare to FacebookShare to Pinterest
Labels: 2012, Interviews