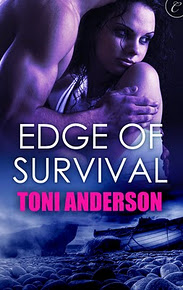 Things hot up in the wilderness
Three things you will learn whilst reading the Edge of Survival by Toni Anderson;


·        Girls, we’re looking for love in all the wrong places; it’s in rough, isolated mining communities;


Toni describes Cameran Young (Cam) as one of the gutsiest, most intelligent characters she’s ever written and, as a good protagonist requires flaws, her heroine, suffers with diabetes.  This physical challenge plays an important role in the story, creating constant tension as she manages her disease.
Cam is a biologist sent to an isolated North Canadian mining project to assess their impact on the native wildlife.  Within the first chapter and, on Cam’s first day, she discovers the dead body of a local prostitute.  She also meets Daniel Fox, an ex SAS Sergeant, with a guilty past, who is to be her, and, her assistant Vikki’s, helicopter pilot.


Their attraction to each other is immediate but they both battle their desire to act upon their feelings.   Haunted by his memories of his last SAS assignment, Daniel an emotional loner wishes Cam gone, whilst feeling an overwhelming urge to protect her.  Daniel represents everything Cam dislikes in a man.  He’s not only an arrogant womaniser but she suspects he is also a cold blooded killer with a violent past.
But there is a killer on the loose and he has decided Cameran is a threat. As Staff Sergeant Kershaw investigates the killing, Daniel and Cam find themselves not only attempting to avoid falling in love but also attempting to stay alive.  Not an easy thing in an isolated community where outsiders are unwelcome and the killer has all the advantages.


Toni Anderson is donating fifteen% of her royalties to diabetes research, which is another good reason to enjoy the guilty pleasure of Edge of Survival.

This review published in December 2011 issue of Suspense Magazine