The Clifton Chronicles: Be Careful What You Wish For by Jeffrey Archer

Since Not A Penny More, Not a Penny Less, I’ve idolized Jeffrey Archer as an author. Jeffrey Archer is the master of characterization and suspense. Somehow he commands that you care about the results of a high school exam, the vote for a board Chairman, or whether a cruise-ship will meet its construction deadline. None of these challenges are exciting mysteries. Yet we must know the answer.

At age 74, after 35 years as a best-selling author, and over 270 million copies of books sold, Lord Archer has brought us a great series: The Clifton Chronicles, which follows the life and story of Harry Clifton and his heirs. We meet Harry in 1919 Bristol and follow him and his friends through to the 1940’s and the Second World War, and in Be Careful What You Wish For, the fourth volume we are taken through 1957 to ’64.

This book is essentially Harry Clifton’s wife, Emma Barrington-Clifton’s, story. Readers enjoy front row seats at the boardroom drama of Barrington’s, Emma’s family’s ship-construction company. The board-members are gambling the future of the company on the building of a luxury liner. High stakes criminal Martinez, who bears a murderous grudge against the Clifton family, is out to scuttle Barringtons, and there is much fun with wheeling and dealing in shares and board appointees. Like the previous books, this leaves us hanging on a cliff. It has all the twists, turns, dirty tricks, tragedies and vendettas that have made this series so fabulous.

Jeffrey Archer is possibly the greatest storyteller of our time. The Clifton Chronicles, his most ambitious story, requiring of Archer a commitment of more than five years, with rumors that the five-part series may become seven. The series only curse is that there’s a year's wait after each book.
. 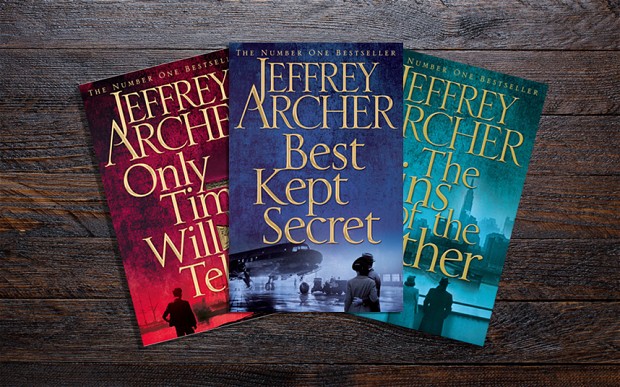 The Clifton Chronicles Series
Only Time Will Tell Released 2011
The epic tale of Harry Clifton's life begins in 1919, in the backstreets of Bristol. His father was a war hero, but it will be twenty-one tumultuous years before Harry discovers the truth about how his father really died and if, in fact, he even was his father.
Only Time Will Tell takes a cast of memorable characters from the ravages of the Great War to the outbreak of the Second World War, when Harry must decide whether to take his place at Oxford, or join the fight against Hitler's Germany.
In Jeffrey Archer's masterful hands, you will be taken on a journey that you won't want to end, even after you turn the last page of this unforgettable yarn, because you will be faced with a dilemma that neither you, nor Harry Clifton could ever have anticipated.

Jeffrey Archer, whose novels and short stories include Kane and Abel, A Prisoner of Birth and Cat O' Nine Tales, has topped the bestseller lists around the world, with sales of over 270 million copies. He is the only author ever to have been a number one bestseller in fiction (seventeen times), short stories (four times) and non-fiction (The Prison Diaries). The author is married with two sons and lives in London and Cambridge. www.jeffreyarcher.com
Posted by Susan May Writer at 6:33 PM