The Divergent Trilogy by Veronica Roth

Its not easy being different

Harry Potter was very concerned about joining Hogwart’s faction Slytherin as it seemed a breeding ground for bullies, where as Hufflepuff was mostly filled with jolly wizards.  But in Veronica Roth’s dystopian novels, Divergent and Insurgent, factions are a life commitment and there isn’t a chatty sorting hat in sight.
Roth by the age of 23 had best sellers on her hands with Divergent and its follow up Insurgent.  In 2012 she added a movie deal for her trilogy and is one of the new breed of authors, like the Hunger Games' Suzanne Collins, capturing the imagination of young readers by supplying a bleak future for humanity.
In a dystopian Chicago, the population has divided themselves into five very different groups abiding by a strict code of conduct; their behaviour almost genetically implanted in them.  These factions, the citizens decide, allow them to live harmoniously.
Beatrice is born into Abnegation (the Selfless), and we meet her on her sixteenth birthday when she must choose to stay in her faction or transfer, and live the rest of her life in one of the other factions—Erudite (the Intelligent), Candor (the Honest), Amity (the Peaceful), Dauntless (the Brave).  Before deciding their future alliance all candidates must undertake an aptitude test to assist their decision.  Beatrice results are not so clear cut; unbeknown to her she is divergent with an aptitude to fit into more than one faction, a seemingly dangerous trait.

At the ‘Choosing Ceremony’ she transfers to Dauntless, forsaking her family.  In her first hours at Dauntless she discovers they demand new initiates survive a ruthless initiation program for a limited ten spots.  The unsuccessful will become ‘Factionless’, a terrible fate of bleak homelessness.  During the program Beatrice, now renamed ‘Tris’, befriends fellow initiates and discovers that her talent for the tests creates dangerous enemies.  Despite her best efforts she also finds herself attracted to their seemingly heartless trainer, Tobias "Four" Eaton.
Insurgent follows on directly from Divergent, taking Tris and her collaborators on a journey into the true origin of the Factions. They will fight for the future of all divergents against faction leaders whose goal is anything but harmony between factions.
The final in the trilogy is due for release in 2013. 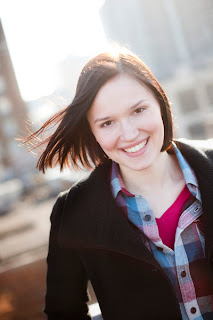 Veronica Roth graduated from Northwestern University with a degree in creative writing. While she was a student, she often chose to work on the story that would become ‘Divergent’ instead of doing her homework. It was indeed a transforming choice. Now a full-time writer, Ms Roth lives near Chicago.
DIVERGENT is her first novel.
Visit Veronica Roth's Official Blog: http://veronicarothbooks.blogspot.com.au/

Posted by Susan May Writer at 1:02 AM