NOT JUST FOR KIDS 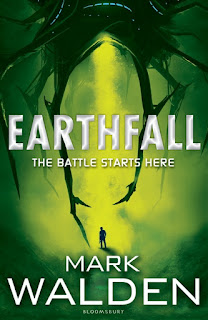 Dystopian novels are my favourites and so even though this book is aimed clearly at middle school readers it was a very engaging read for an adult.  It’s not a large book at 288 pages.  However, sometimes that is exactly what you feel like reading after wading through a tome like Justin Cronin’s The Twelve, at almost 600 dense pages.
So EARTHFALL was like a cool refreshing drink.  If you are looking for an engaging, action packed read for your child this will do the trick.  And if you are like me and a sucker for WAR OF THE WORLD sagas, then you won’t care that the protagonist is a young boy.
Mark Walden is the author of the very popular H.I.V.E series and he was inspired to write EARTHFALL because he believed there hadn’t been a book written featuring a simultaneous worldwide invasion.
In EARTHFALL, alien ships appear above London and suddenly every human being loses their free will and begins walking silently towards an unknown destination.  Everyone, except Sam, who watches his sister and Mother walk out the door with the rest of the neighbourhood.  He follows them but cannot stop them and is forced to leave them and become a fugitive from the invaders.
Six months later and Sam has yet to find anyone like him who is not enslaved by the aliens.  He spends his days trying to survive and avoid the drones and alien invaders until he is stung and poisoned by a robotic drone.  It should have killed him but somehow he survives.  Ill and disorientated he is found by a small, organized group of other kids who are battling to save the Earth from the invasion.
This is the first of the series, which Walden explains will run alongside his H.I.V.E. series.  EARTHFALL II is due to invade stores in 2014.  This book captured my imagination and I am looking forward to being enslaved again.
My review copy of EARTHFALL thanks to the lovable people at Bloomsbury Publishing Australia 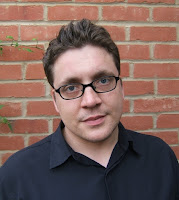 Mark Walden's first book, H.I.V.E., won Richard and Judy's 'Best Kids' Books Ever' 9+ category. Paramount has optioned the film rights, and it was chosen as one of ten titles for Booktrust's first Booked Up scheme. Mark has followed this success with a further six titles in the extraordinarily brilliant H.I.V.E. series and as a WBD author for 2009. He lives with his family in Hampshire.