A LITTLE MAGIC AND A LOT OF NASTY 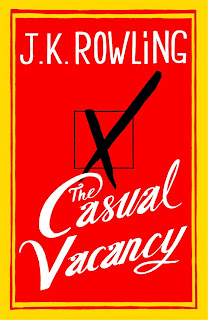 It’s as far from Harry Potter as a muggle is from a wizard.  The first book from Harry’s creator J.K. Rowlings certainly contains not a scrap of magic and not a wand in sight.  In fact, within the first two chapters the C-bomb and other choice curse words are dropped enough times that you are left in no doubt that the next five hundred pages are not for the prudish and definitely not for children.
‘It’s a big book about a small town’, says the publicity blurb and the small town is Pagford where a much loved resident Barry Fairweather has died unexpectedly leaving behind a mourning wife and family, and a town of people who either win or lose from his death.
You see, Barry was on the Parish council and his death means there is now a ‘Casual Vacancy’ on that council.  There is much at stake. The ‘big’ city of Yarvil has built a slum suburb, the Fields, on the boundaries of the peaceful, quaint Pagford.  Barry was fighting on the council to have the unlovable Fields become part of Pagford which would be a disaster in the minds of many residents.
As several townsfolk vie for his seat, we realise Pagford is a town divided by discrimination, prejudice and just plain nasty gossip.  The teenage characters are no better with drug-taking, casual sex, bullying, cyber-vandalism and even skin-cutting constant past-times.
But is it good? That is the question on everyone’s lips.  This is a literary book written by an author who is undoubtedly the master of characterisation.  The characters, awful as they are, stand up from the pages like holograms sucking you into Rowling's world.  It is a soap-opera of the literary degree and if you enjoy eavesdropping and finding characters that are more life-like than we care to know, then this book is for you.  If you are looking for escapism and a fantasy world where good wins over evil then ‘The Casual Vacancy’ will disappoint. This is a book by an assured author who wrote not for her fans but herself and who loves even the ugliest of her characters. And I found much magic in that. 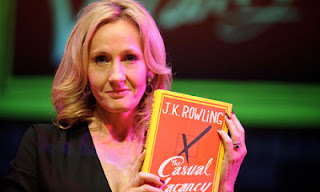 J.K Rowling is the author of the bestselling Harry Potter series of seven books, published between 1997 and 2007, which have sold over 450 million copies worldwide, are distributed in more than 200 territories, translated into 73 languages and have been turned into eight blockbuster films. She has also written two small volumes, which appear as the titles of Harry's schoolbooks within the novels. Fantastic Beasts and Where to Find Them and Quidditch Through the Ages were published by Bloomsbury Children's Books in March 2001 in aid of Comic Relief.
In December 2008, The Tales of Beedle the Bard was published in aid of the Children's High Level Group and quickly became the fastest selling book of the year. As well as an OBE for services to children's literature, J.K Rowling is the recipient of numerous awards and honorary degrees including the Prince of Asturias Award for Concord, France's Legion d'Honneur and the Hans Christian Andersen Award and she has been a Commencement Speaker at Harvard University USA. She supports a wide number of charitable causes through her charitable trust Volant and is the founder of Lumos, a charity working to transform the lives of disadvantaged children.

Email ThisBlogThis!Share to TwitterShare to FacebookShare to Pinterest
Labels: 2012, 4 Star