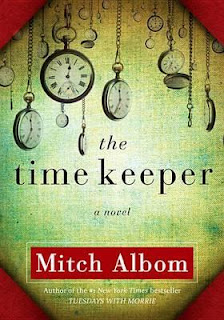 Years ago I wept as I read Mitch Abom’s ‘Tuesdays with Morrie’.  So when I saw he had a new book on the horizon I thought now was a good time to reacquaint myself with his unusual style and take on the world.
In ‘The Time-Keeper’, he writes an engrossing parable on the meaning and value of time. Imagine if you didn’t have a word for time?  There wouldn’t be a tomorrow. There would be no plans for next weekend.  We would live in the moment.  It’s a difficult thing to imagine in this technological world we now inhabit, where every second, thanks to smart phones and iPads is usually filled with some kind of plan.
Our world before the concept of time is the place into which Abom first introduces us to his lead character. Dor, an early inventor, one day happens upon the measurement of time, building the first sun-dial and devising other concepts for tracking time.  When Dor’s beloved wife Alli falls ill he confronts and challenges God to save her.  In response God banishes him to a mystical cave where he is transformed into Father Time, and then forced to endure the constant pleading from the inhabitants of earth forever. They beg for more time, less time, time to speed up, and time to slow down; the time he invented now rules the world.
As his soul withers from the constant voices and the monotony of isolation, he is granted the chance to escape his prison by saving two seemingly unconnected people using a magical hourglass.  Sarah Lemon is counting down time as she anticipates her first date.  Victor Delamonte, one of the world’s richest men, finds his wealth can’t save him from a terminal disease, until he devises a scheme to cheat death.   How can Dor save these two people when he cannot even save himself?
This very question kept me reading way past my bedtime.  Abom writes in a unique and simplistic style but his lessons are deep and thought provoking.  Whilst reading you will be reminded of at least one truth: time passes quickly when you hold in your hands a fabulous book. 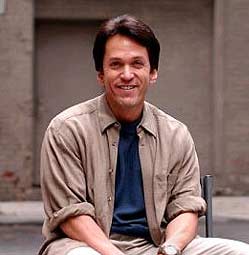 MITCH ALBOM is an internationally renowned and best-selling author, journalist, screenwriter, playwright, radio and television broadcaster and musician. His books have collectively sold over 33 million copies worldwide; have been published in forty-one territories and in forty-two languages around the world.
All three of Albom’s best sellers have been turned into successful TV movies. Oprah Winfrey produced the film version of Tuesdays With Morrie in December 1999, starring Jack Lemmon and Hank Azaria. The film garnered four Emmy awards, including best TV film, director, actor and supporting actor. The critically acclaimed Five People You Meet in Heaven aired on ABC in winter, 2004. Directed by Lloyd Kramer, the film was the most watched TV movie of the year, with 19 million viewers. Oprah Winfrey Presents Mitch Albom’s For One More Day aired on ABC in December 2007 and earned Ellen Burstyn a Screen Actors Guild nomination. Most recently. Hallmark Hall of Fame produced the film adaptation of Have a Little Faith, which aired on ABC in November 2011. It starred Laurence Fishburne, Bradley Whitford, Martin Landau, and Anika Noni Rose.
In 2010, Albom was named the recipient of the Red Smith Award for lifetime achievement by the Associated Press Sports Editors.
He lives with his wife, Janine, in Detroit, MI.
To learn more about Mitch Albom visit http://mitchalbom.com/books
Posted by Susan May Writer at 7:07 PM