Australian and New Zealand Book Lovers
Win a copy of The Golden Scales at Myshoppinglist.com.au
Competition open until 15th July 2012

A Thrilling Place to Visit

A mystery set in Cairo is not my traditional fair. Throw in a plot involving football and you’ve almost lost me.  However, as I read this first paragraph, I realised my visit to Cairo via The Golden Scales was to be thrilling, led by a writer who knows how to open with a punch. “The bright light struck her full in the eyes and for an instant she was blinded, as if struck by some ancient curse. Liz Markham reared back, completely stalled by the human mass that confronted her.  Her heart racing, she began to run.  Her child was somewhere out there, lost in this madness.”
By the time I’d turned the first page, I knew another thing, London born author Parker Bilal (pen-name of  Jamal Mahjoub) could write and pace with the best mystery thriller authors.  This from an writer classified as a literary novelist—which I usually take to mean ‘can turn a beautiful praise but the pace is slow.’
The Golden Scales introduces us to Makana, an exiled Sudanese private investigator, living on a run-down Nile houseboat.  Hired by wealthy Hanafi, owner of Cairo’s star football team, he finds himself investigating the team’s star player Adil Romario.
Everything is a closely held mystery until the last few pages: What happened to Makana’s wife and daughter years before? Why did the powerful Hanafi hire the lowly Makana?  What does a twenty-year-old case of a missing child and her English mother Liz have to do with his investigation?
As layers of sub-plots and colourful characters are paved, you are drawn into a fascinating world of the wealthy and glamorous of Cairo and just as quickly plunged into the dark and cutthroat life of the criminal underworld.  The links between the two revealing themselves the deeper Makana pursues his leads.
This is Egypt without the pyramids but peopled with dark characters, intriguing back stories and a stoic, intelligent lead character, who carries himself with credible assurance.
Bilal has created a character and setting thriller lovers will be eager to visit again and again.  The Golden Scales is the first of a detective series featuring Makana and this is one reader who looks forward to my next visit to Egypt, with our without pyramids. 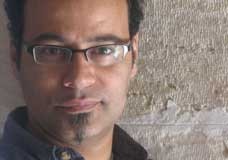 Parker Bilal is the pseudonym of Jamal Mahjoub. Mahjoub has published seven critically acclaimed literary novels, which have been widely translated.
Born in London, he has lived at various times in the UK, Sudan, Cairo and Denmark. He currently lives in Barcelona. Visit http://www.jamalmahjoub.com/ to learn more about this author.
Thank you to Bloomsbury Australia for my review copy of 'The Golden Scales'. Visit Bloomsbury ANZ for more information on their other fabulous titles.

Purchase this book from Allen & Unwin
Available Now RRP $29.99
Posted by Susan May Writer at 10:51 PM